I’ve been chewing on the idea for my next game for a bit. “IDEA?!?” you say? It might seem silly to be here throwing out my idea at you (when ideas are generally considered worthless). But Ryan Clark says the right idea is super valuable and I find that pretty convincing.

The game is called DUSK BELT and it’s set on a tidally locked planet. The basic concept is that one side of the planet is constant day, making it a blistering hot desert. The other side is an eternally dark frozen tundra. In between is a narrow temperate zone where most of civilization resides. Your goal is to get to both “poles” and presumably fight some bosses at each one, which of course turns the thing into a survival game but one with an interesting duality. In half the game, you struggle with heat, exhaustion, and thirst. In the other, you struggle with darkness, cold, and hunger. Ignore the hard science realities of such a place and consider only the abstract version I’ve described above. Even with that little setup, it seems to me to be a damn cool idea!

I’ve wanted to make a big survival game for a while. Survival games* always bug me in that, they’re fun until you get to a baseline of comfort and then the challenge typically disappears. Surviving the first 10 minutes in Minecraft is hectic, but once you have a 3×3 dirt house you’ve mostly solved the shelter issue. The other thing is that I like survival on the go. I like the idea of exploration and making due with what you find on your travels. For me, it helps to have a goal, particularly in the form of a physical destination you’re trying to reach. Most survival games are about plopping down and exploring only the nearby area. My first game jam game, still probably my favorite, explored these ideas. The game gets progressively more difficult as time goes on and the only way to win is to travel a really long distance in a certain direction. I want to explore that further.

*I keep saying “most survival games” do this or that. I’m sure I’m not particularly well versed in the genre, so am happy to take recommendations…

Beyond that, survival is just a mega popular genre. I’ve lost track of how many word clouds and graphs I’ve seen with survival and crafting crushing steam. My last game was a traditional roguelike and it while it was well received among its audience, to a first approximation nobody has even heard of it. Traditional roguelikes are a niche among niches. I would argue that most people don’t know the genre itself even exists as a separate thing. It’d be cool to try something with a bit more appeal to your average gamer. 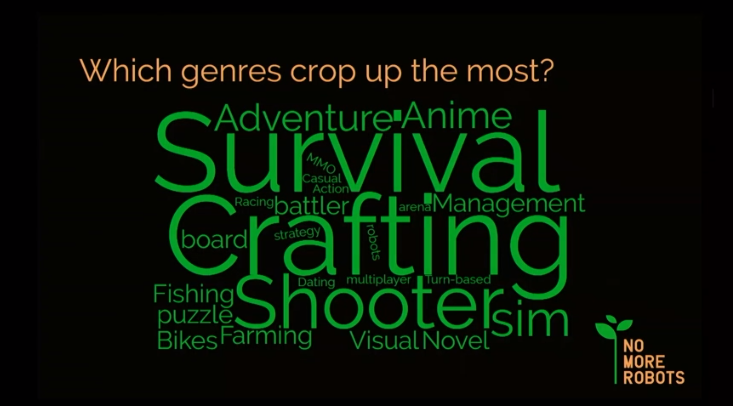 The “least useful” slide from Mike Rose’s talk Let’s Be Realistic: A Deep Dive into How Games Are Selling on Steam

Beyond survival aspect, I also want to mix in some combat. I imagine it’ll be a lot more interesting exploring the pitch dark side of a planet if creepy monsters are out to get you. I haven’t thought about this too deeply, but I’m leaning towards a roguelite metaprogression that drives the game. I would love to make a game that was as fun as Rogue Legacy or Dead Cells in that aspect. Of course, I’m sure many fans of my last game which had zero metaprogresssion will be turned off. Again, I face a harsh reality that 99.9% of gamers absolutely hate starting over from scratch.

I initially assumed the game would be a big open world, top-down game. It seems so obvious. Survival works very well in top-down. It makes the scale of the world seem huge and gives you plenty of space to explore. It gives you a chance of actually getting lost, which is totally my jam. For the combat, I could take cues from games like Nuclear Throne.

Then I got stuck on something surprising: the art. I need to come up with an art style that allows me, a single (not artistically inclined) developer with little time, to crank out art assets. I’d like to try something other than pixel art for once. The obvious choice after that is to hand draw and animate top-down characters in 4 or even 8 directions. Ugh, no thanks!

I kept landing on the following style of art: draw characters from a profile view, draw their appendages separately, connect them all together with a skeletal system, and then get free animation by rotating everything. I’m sure there’s a name for this, but I have no idea what it’s called. It seems to be used in a lot of games though. I know it’s used in One Hour One Life (the developer has some interesting stuff to say about survival too), but I also see it in games like Limbo and Pinstripe.

For one, this allows assets to be produced really fast. Draw characters facing one way and you get the other direction for free. There’s no need to animate things by hand. And then you have the really cool stuff: having detachable/replaceable appendages or a full skeletal system (by that I mean an actually skeleton underneath the normal sprites).

There’s just one problem with that art style: it looks kind of janky in top-down. You don’t get an “up” or “down” direction and even if you drew those directions separately, they couldn’t rotate/animate in the same way. It looks a bit weird in the top-down One Hour One Life, but that seems acceptable given the odd art style. If you add vehicles (ships/cars) or large monsters, the problem is exacerbated. In a side-scrolling view, however, this kind of art works perfectly. Your character only ever needs to face left or right.

It might be weird to be debating this fundamental choice about the game. Shouldn’t I know that already? But the core ideas of the game are about the setting and survival, not the perspective. They could be applied in lots of different ways. So then I started reviewing the pros and cons of each style…

That last one is the big sticking point. Platforming games can have verticality, but the ground is always there as a reference point. Getting lost (unless it’s in a sprawling cave system) seems impossible. Side-scrolling games tend to have smaller scale. It’s hard to imagine the player having any difficulty tracking down vital resources in a tiny space.

One idea I have is to make the distance you can travel left to right absolutely vast, but enable the player to traverse large distances with a vehicle. You could travel at great speeds for a while, but then be forced on foot when periodically running out of fuel. Is that boring? Does any of this make sense? Who knows!

Sorry for the stream of consciousness, but that’s where I’m at. Super early stages, but I’m excited about this idea.

I need to either accept the weirdness of my chosen art style in top-down or figure out a way to make survival work with a side-scrolling perspective.